Today we announce the already traditional winter sale! Just like it was in previous times, if you order 10 or more items marked with [-50%], you get 50% discount for them. There are about 1250 items in distro catalogue taking part in this action. Sale items in rare & used list are marked with green colour. Since the New Year holidays are coming very soon, all your orders will be reserved and sent out after January 7th.

Have a happy 2013 and let it be full of fun!
Thank you for staying with us all this time! 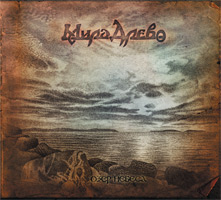 After the celebration of the Great October Revolution, with great pleasure we commemorate the 20 years of existense of the Canadian experimental project The Infant Cycle by releasing his new album "Drop-out Center" full of elaborate hallucinogenic sound constructions.

Along with it we present the debut album of the St. Petersburg based project Mira Drevo "Heavens of Lakes", released by the label BioSonar^EleKtro (run by Evgeniy Savenko / Lunar Abyss) in cooperation with ZHELEZOBETON Distribution Division. The album is based on authors personal impressions of the journeys made around the Ladoga lake, its islands and environs.

As usual, there are updates in our mailorder catalogue. Among the rest should be mentioned the releases of Moscow based label Dronarivm, new album of the German classics Troum, and lots of other experimental music from gothic and minimalism to post-metal and harsh noise.

Today we continue to immerse in the depths of underground sounds with various degrees of accessibility, detachment, paranoidality and enlightenment. Here we have the microsound research of Russian label Observatoire, a collection of editions by German Attenuation Circuit, first release of Myrkr label (a sublabel of Vegvisir Music), the debut album of the project GaldrareyniR coming from Velikiy Novgorod, Russia, a single by Lunar Abyss, three new cassettes in BioSonar^Lo-End series, and other joys of sonic mindwarping and limitless flight of imagination.

There will be another short break soon - from September 15th to 23rd.

This time the newsletter isn't that big, but quite interesting in its contents anyway. Among other things worth mentioning are: I'd like to notice that mailorder will be closed for 2 weeks from July 20th to August 5th. I will answer to any e-mails with the orders as soon as I return on a first-come, first-served basis.

The previous newsletter was out just some days ago, but what can we do if there's already a lot of material for the new one?! Among the arrivals are a couple of new releases from each of Russian labels Aquarellist and Ewers Tonkunst, discs from the Austrian conglomerate Steinklang, including also such labels as Ahnstern, Percht, Vrihaspati Recordings, etc., and lots of noise releases from various corners of the international underground scene.